You are here: Home > Iran Cities > Esfahan > Esfahan Historical Sites > Naghsh e Jahan the Most Brilliant Jewel on the Ring of the Safavid Architecture

Naghsh e Jahan or Design of the World Square, the Most Brilliant Jewel on the Ring of Architecture And Urban Design of the Safavid Epoch 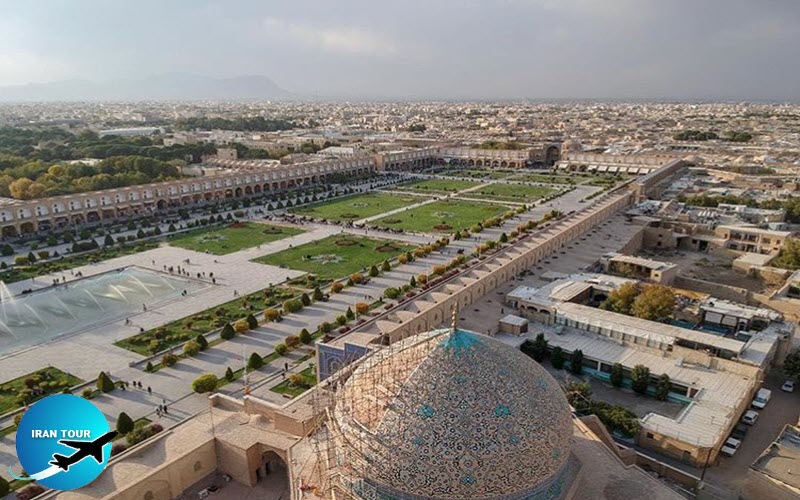 - The Proportions and Sizes of the Naghsh e Jahan Square

Definitely, for the relocation, it was necessary to replace some new elements with previous ones and the relics, of the Seljuk era, (11th century) which widely concentrated at a large, old square, Maidan-e-Kohneh' with 5 hectares of the approximate area facing Mecca. In practice, the new 17th-century city planning, contrary to the previous one (5 centuries before) based on a wavy and cellular texture with many narrow covered public areas, followed revised urban planning founded on more spacious public areas with two different guide axes: the first was longitudinal axis of Naghsh-e Jahan' and the second, Chahar Bagh Boulevard axis. Although two opposite viewpoints between the old and new patterns were prevailing, the endeavor of the  in the Safavid era focused on the settlement of the modern city in close proximity to the old one, via transition elements to pave the way for a gradual shift of citizens from the older textures towards the new ones voluntarily.
To materialize this idea, the urban design focused on a covered bazaar as a transition element between the old city, with 8 gates as entrances, and the new one with 12 gates of an area about 2.5 times larger. Nevertheless, the existence of a new square to play a central role in the modern city was one of the first priorities in the process. It would be a square that could meet all the public and individual needs of capital, with an approximate population of half a million according to the travelogue of Chardin, the French traveler. On the other hand, it should function as a crucial infrastructure to incorporate four of the most splendid representatives of power.

On four sides of Naghsh-e-Jahan' square about four centuries ago, four monumental structures were built on each side respectively: Ali Qapu Palace as an administrative center, Qeisarieh Bazaar as the center of economy, Sheik Lotfollah Mosque as a political-religious center, and Jam-e-Abbasi Masque' as a leading mosque and as a center of the volition of the public. The arrangement of the buildings followed an approximate clockwise movement around the surrounding walls of the square.

In accordance with the measured size of the square, it is 525 meters long, 159 meters wide, and covers an area of about 83.500 square meters only for the inner space of which. However, by summation of surrounding bazaars on the eastern, southern, and western sides, it exceeds (except for the main bazaar on the north) 100.000 square meters. The diagonal of the square is 548.5 meters and there exist over 800 chambers consisting of 200 shops facing the square, 200 balconies, 200 chambers reconstructed behind the balconies, and 200 shops in the covered bazaars built-in equal size and form. The height of the rectangular wall around the square is 13.2 meters from the bottom of the square. By multiplying three sizes of length, width, and height the figure of 1,100,000 cubic meters obtains seems to be a figure about ten million times larger than the volume of a large-size man. In the visitors' minds, it is like a drop in an ocean of secrets and wonder.

If a visitor stands on the southern side of the square at the portal of the Jam-e-Abbasi Mosque' and estimates the square length and, then turns an opposite position on the northern side the square seems considerably longer about 200 meters. Upon further scrutiny, it is an optical illusion caused by the location of the two buildings not being exactly in the middle. After measuring it, 320 meters is the interval between the gate of the bazaar and the two buildings of Sheikh Lotfollah Mosque of Ali Qapu palace centerline, but 205 meters interval from the gate of Jam-e-Abbasi Mosque' to the two buildings. Simply put, if one divides the square length into 10 equal parts, with our backs to the gate of the mosque we look and estimate eight out of ten subdivisions (underestimation), while if the same person, stands back the bazaar, it seems twelve subdivisions for the length instead (overestimation 120%). Another indication may relate to an ancient category under the title of the Golden Proportions which was a criterion for designers to create a more efficient and successful pattern.

As we know the proportion between the upper part and the whole part of the body of a normal human being is 0.4 which is the same ratio used in the square for the location of the two buildings on the eastern and western parts. Besides, by the knowledge of this item that the gate of Qeisarieh was actually one of the entrances to the new city such a layout could induce a more glorious view in the mind. The main question is still about the main purpose followed by the designer. The best answer is that there exists a labyrinthine bazaar of more than 6 kilometers, tens of caravanserais, arcades, and public spaces for settlement of tens of daily movements of caravans with goods and camels. After entering the city, caravans normally stopped in the northern part of the bazaar where leaders would try to find someplace for accommodation and good exchanges. So, every day tens of large caravans stopped for a couple of days and a more spacious expanse was required in the northern part.

According to historical resources and travelogues, several ceremonies are held in the square such as a parade, polo, firework, national and religious ceremonies, the punishment of criminals, etc. Actually, there have been some changes made from the initial sandy cover to the thick stone floor past one-floor pavement of the square today, and the new land arrangement, there are no more polo games there, but still, the polo gates exist at the site (The two stone columns with conical tops on the southern part, 8.4 meters distant from one another).
In the past, on certain days, the square was filled with the tents (cotton) of peddlers, selling their wares to thousands of people. All around the square, there were trees and a wide-open canal with a stone lining for running water. During the nights, the square was changed into a lovely area for the performance of plays and meetings. At the time of the Safavid era, safety and security were guaranteed in the case that something was stolen from the tents or shops, guards were either obliged to find it or pay its fee to the owner.

After looking at a map of Esfahan, we will notice an existing angle between the longitudinal axes of the square and the Boulevard intersecting one another about 500 meters farther down than Shohada Circle in Kaveh Boulevard. On different maps, they show an average angle of 18 degrees raising a question about this format: why would the same urban designer, consider two different axes in the central part of the city design with such a considerable deviation to one another? Concerning the Chahar Bagh axis and its direction, ample details are given in the section on Sio-Se-Pol and Chahar Bagh, but about the square without dwelling on the special urban categories, we came up with these findings. City planners and architects of Esfahan, from thousands of years ago, had discovered a particular axis in Esfahan, which according to the latitude-longitude altitude, direction, of local winds, humidity, and the geological terrain gave the optimum absorption of the maximum radiation and energy of the sunlight by experience. Hence, we find that the same direction was considered for the over 2000-year-old fire temple of Esfahan. Normally, the exertion of this axis could manage an arrangement for the direction of the streets and location of houses called: “The Optimum Climatic AXIS.
Another interesting point is the existing proportion between the width and the length of the square which is, and with respect to this fact that the optical angle of vision for a man is 130 degrees. the optimum ratio between the width and length of a certain rectangular area to induce the maximum vastness in the mind of visitors is 1/3 which is traditionally used even for the land divisions of the plots in the residential areas later as a suitable pattern.

For the unique square of 'Naghsh-e-Jahan' many titles were used to show its high-ranking position as an addition to the Seven Wonders of the World; the second-largest historical square after the T'ien An Men Square in Beijing. Nevertheless, the most important documentary title given to “Naghsh-e-Jahan was donated by his Excellency Federico Mayor, the Secretary-General to UNESCO, on his visit to Esfahan in 1991 A.D. as the tenth cultural heritage of human beings. It was a fruitful visit that recorded the square as the registered international site of Iran after Persepolis, in Fars province and “Zigurat-e-Chogazanbil' in Khuzestan. Hereby, the high position of Esfahan was reconfirmed once more as a cosmopolitan city that not only belongs to her citizens but also to the whole world.

-The Present Functions of the Square
"Naghsh-e-Jahan', for the present, is one of the most attractive historical recreational worldwide complexes. Without any exception, every visiting group or individual considers it a priority to visit it for about half a day and spend the other half strolling around it, taking in the traditional textures and the tempting shops in the bazaars.